This item is an 8" X 11", black and white photo of George Zimmerman.George Zimmerman is the Florida man who shot and killed 17-year old Trayvon Martin on 26 February 2012, launching heated public arguments over gun laws and racial profiling. He was found not guilty of Martin's death after a jury trial in 2013. George Zimmerman lived in a gated community in Sanford, Florida, a suburb of Orlando. He was an unofficial neighborhood watchdog, with a history of calling the local police force to report what he considered suspicious behavior. On a Sunday evening in February, Zimmerman spotted Martin, a teenager who was walking home from a neighborhood convenience store. Zimmerman called the police and was told he didn't need to pursue Martin. A short time later, some kind of altercation led to Zimmerman using his pistol to kill Martin. The incident achieved little notice when it first happened, but became a national story a month later, after Martin's parents hired an attorney and went public with the question: Why wasn't George Zimmerman arrested? Local police cited Florida's "Stand Your Ground" law for the use of guns as justification for letting Zimmerman walk, but a more vocal group suggested that Zimmerman had racial motives for pursuing Martin, who was black. A widely-publicized photo of the racially-mixed Zimmerman only muddied the waters (his father is of European descent, and his mother is of Peruvian descent). A national debate ensued, detached from what few facts were known about the case. Florida authorities launched an investigation and appointed a special prosecutor, and in late April of 2012 Zimmerman was charged with second-degree murder. His trial began on June 24, 2013; the case went to the jury on July 12th, and he was found not guilty the next day. The photo has been autographed by George Zimmerman...........BOTH PHOTO AND AUTOGRAPH ARE IN EXCELLENT CONDITION. 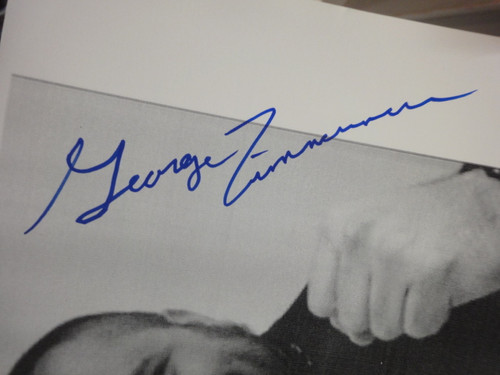