This item is an 8" X 10", black and white photo from the 1960's of actor Tony Young. The photo was probably published in a newspaper as the back of the photo has original editor's markings.The son of character actor Carleton G. Young, Tony Young was born in New York and raised in Hollywood. A handsome, athletic teenager, Young was offered a few film roles in the early '50s, but his father insisted that he get an education before launching a career. After stints with the Air Force and Los Angeles City College, the 6'3," 195-pound Young found showbiz work of sorts as an NBC page. Making all the right connections, he began landing TV roles in 1959. Two years later, he starred as U.S. Cavalry undercover agent Cord in the weekly TV Western Gunslinger. Tony Young remained typecast in Westerns ever afterward, essaying fast-draw roles in such films as Taggart (1963) and Charro (1969).The photo has been autographed on the front cover by Tony Young in black fountain pen...............BOTH PHOTO AND AUTOGRAPH ARE IN EXCELLENT CONDITION........ 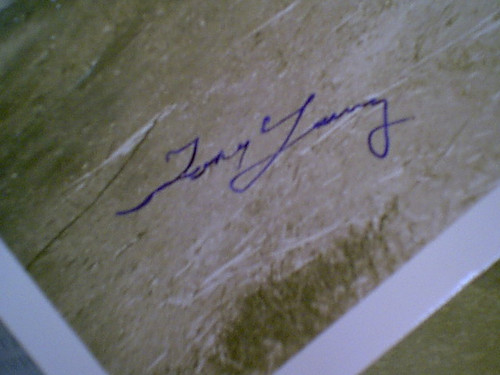