Country Song Roundup Magazine-March 1954-34 pages. This vintage magazine-which originally sold for twenty fives cents-features a cover photo of Faron Young plus an article with photos.Originally known as "the Hillbilly Heartthrob" and "the Singing Sheriff," Faron Young had one of the longest-running and most popular careers in country music history. Emerging in the early '50s, Young was one of the most popular honky tonkers to appear in the wake of Hank Williams' death, partially because he was able to smooth out some of the grittiest elements of his music. At first, he balanced honky tonk with pop vocal phrasing and flourishes. This combination of grit and polish resulted in a streak of Top Ten hits -- including "If You Ain't Lovin'," "Live Fast, Love Hard, Die Young," "Sweet Dreams," "Alone With You," and "Country Girl" -- that ran throughout the '50s. During the '60s, Young gave himself over to country-pop, and while the hits weren't quite as big, they didn't stop coming until the early '80s. Through that time, he was a staple at the Grand Ole Opry and various television shows, including Nashville Now, and he also founded the major country music magazine, Music City News. Most importantly, he continued to seek out new songwriters -- including Don Gibson, Willie Nelson, and Kris Kristofferson -- thereby cultivating a new generation of talent. The magazine has been autographed on the front cover by Faron Young with a fountain pen in brown.........BOTH MAGAZINE AND AUTOGRAPH ARE IN VERY GOOD CONDITION.......................... 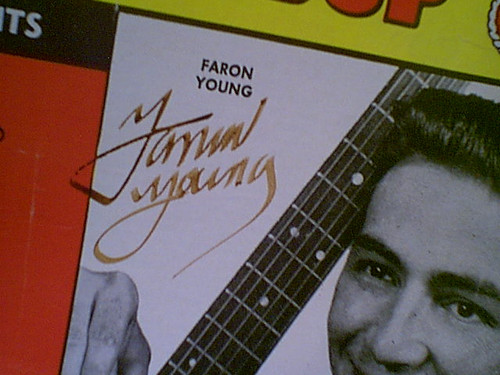