This item is an 8" X 10",black and white photo of Alan Young with the original cast from the 1960's television series-"Mr. Ed".Mister Ed was an American television situation comedy produced by Filmways that first aired in syndication from January 5 to July 2, 1961 and then on CBS from October 1, 1961 to February 6, 1966. Mister Ed was the first series ever to debut as a midseason replacement. The stars of the show are Mister Ed, an intelligent palomino American Saddlebred who could talk ("played" by gelding Bamboo Harvester and voiced by Allan Lane), and his owner, an eccentric and enormously klutzy architect named Wilbur Post (portrayed by Alan Young). Much of the program's humor stemmed from the fact Mister Ed would speak only to Wilbur, as well as Ed's notoriety as a troublemaker. According to the show's producer, Arthur Lubin, Young was chosen as the lead character because he "just seemed like the sort of guy a horse would talk to." Lubin, a friend of Mae West, scored a coup by persuading the screen icon to guest star in one episode.The photo has been autographed on the front by Alan Young.........BOTH PHOTO AND AUTOGRAPH ARE IN VERY GOOD CONDITION...... 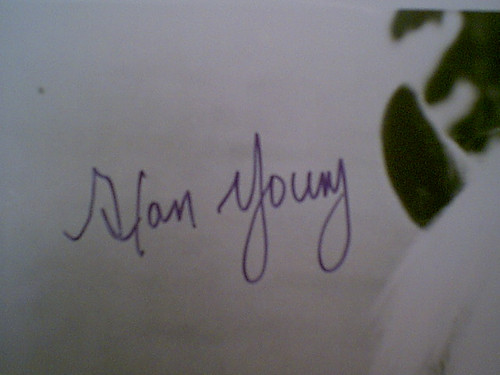