THIS IS AN AUTHENTICALLY AUTOGRAPHED PHOTO BY ALAN YOUNG AND CELESTE HOLM.. THIS IS A 8 INCH BY 10 INCH BLACK AND WHITE PHOTO SIGNED BY ALAN YOUNG AND CELESTE HOLM. CONDITION OF THE PHOTO AND AUTOGRAPHS IS AVERAGE. Alan Young (born November 19, 1919) is an Emmy Award-winning English-born character actor, best known for his television role opposite a talking horse, Mister Ed and as the voice of Scrooge McDuck. During the 1940s and 1950s he starred in his own shows on radio and television. Born as Angus Young in North Shields, Tyne and Wear, England, he grew up in Edinburgh, Scotland and in Canada. He came to love radio when bed-bound as a child because of severe asthma. Celeste Holm (born April 29, 1917) is an American stage, film, and television actress, known for her Academy Award-winning performance in Gentleman's Agreement (1947), as well as for her Oscar-nominated performance in All About Eve (1950). 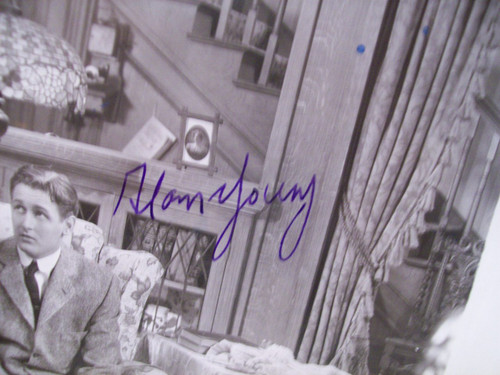