"Stage" Magazine-January 1938-9" X 13"-91 pages. The vintage Stage Magazine-which originally sold for thirty five cents-features a full color cover photo of actor Ed Wynn. The magazine also features a two page article with photo of Ed Wynn in an original scene from the play he is starring in-"Hooray For What".Born Isaiah Edward Leopold, Wynn ran away from home at 15 to work as a utility boy for a stage company, with which he also acted. The company failed and he returned home. Shortly thereafter, he moved to New York, soon becoming a vaudeville comic headliner. In 1914, he began appearing with the Ziegfeld Follies, billed as the Perfect Fool; meanwhile, he got into a widely publicized feud with another Ziegfeld star, W.C. Fields. After organizing an actors' strike in 1919, he was boycotted by the Shuberts. At the height of his popularity as a Broadway comic star, he got around the boycott by writing and producing his own shows, which were both critical and popular successes. Having appeared in a few films, in the '30s he increased his popularity on radio as the Texaco Fire Chief. At the end of the '30s, several of his business ventures collapsed, including a radio chain; he suffered a nervous breakdown and his career seemed over. He bounced back on Broadway in the '40s. In 1949, he won the first TV Emmy Award as Best Actor in a Series. Out of work in the '50s, when his comedy style had become dated, he was encouraged by his son  actor Keenan Wynn  to launch a new career as a film actor. From 1957 to 1967, he was busy onscreen as a dramatic character actor, and for his work in The Diary of Anne Frank (1959), he received a Best Supporting Actor Oscar nomination. He also appeared in TV dramas. The magazine has been autographed on the front cover by Ed Wynn with a fountain pen in black.....................BOTH MAGAZINE AND AUTOGRAPH ARE IN VERY GOOD CONDITION...................... 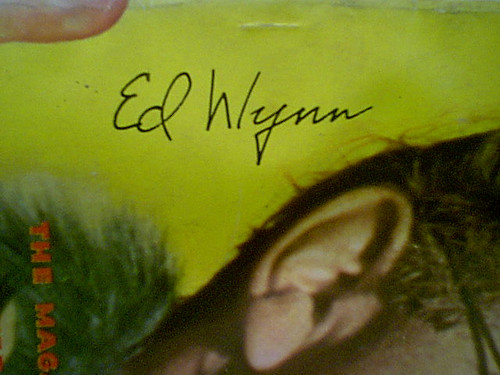