"Andrew Wyeth-An Exhibition Organized By Pennsylvania Academy Of The Fine Arts"-Philadelphia October 8-November 27,1966-9 1/2" X 10"-111 pages-with photos-with illlustrations-softcover exhibition catalog-Signed By Andrew Wyeth.Wyeth, Andrew Newell, 1917, American painter, b. Chadds Ford, Pa. Wyeth's work has been enormously popular and critically acclaimed since his first one-man show in 1937. He was trained by his father, the noted illustrator N. C. Wyeth. The places and people of Chadds Ford and Cushing, Maine, are his principal subjects and they are portrayed in a meticulous, naturalistic style. The best-known of Wyeth's paintings, Christina's World (1948), is at the Museum of Modern Art, New York City. His Helga pictures, a large group of intimate portraits of a neighbor, painted over many years, were first shown publicly in 1986. The exhibition catalog has been autographed on the title page by Andrew Wyeth with a fountain pen in blue..............BOTH EXHIBITION CATALOG AND AUTOGRAPH ARE IN VERY GOOD CONDITION...... 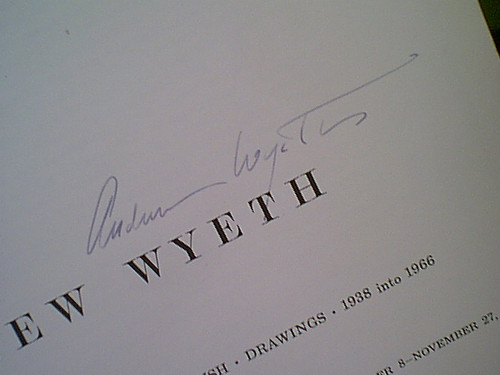