Rolling Stone Magazine-April 10th,1986-Issue No. 471-88 pages. This vintage Rolling Stone magazine-which originally sold for $1.95-features a color cover photo of musician Stevie Wonder plus an article with photos.Songs like "Isn't She Lovely," "Superstition" and "You Are the Sunshine of My Life" won Stevie Wonder more than 20 Grammy Awards and made him one of the most popular rhythm and blues musicians of the 1960s and 1970s. Wonder grew up in Detroit, singing in church choirs and listening to early Motown music. In 1961 he was "discovered" and signed to a Motown contract himself, taking the stage name of Little Stevie Wonder. (Wonder's blindness led to inevitable comparisons with Ray Charles, at the time an R&B superstar.) Wonder went from wunderkind to groovy young man in the late 1960s, turning out cheerful and romantic pop hits along with protest songs about Vietnam and race relations while experimenting with funky, Moog-driven electronic sounds. From 1972-76 he released five albums that are regarded as his masterworks: Music of My Mind (1972), Talking Book (1972), Innervisions (1973), Fulfillingness' First Finale (1974) and Songs in the Key of Life (1976). In the 1980s he reached elder statesman status, winning an Oscar for the pop tune "I Just Called to Say I Love You" (from the Gene Wilder movie The Woman in Red). He also emerged as a steady advocate for making the birthday of Martin Luther King a national holiday. (It became one in 1986.) Wonder's 2005 album A Time To Love won him six more Grammy nominations, and he win for Best Male Pop Vocal Performance ("From the Bottom of My Heart"). His other albums include The 12 Year Old Genius (his first album, 1963), For Once In My Life (1968), and the retrospective Original Musiquarium (1982). He was inducted into the Rock and Roll Hall of Fame in 1989.The Rolling Stone has been autographed on the front cover by Stevie Wonder.......BOTH ROLLING STONE AND AUTOGRAPH ARE IN VERY GOOD CONDITION. 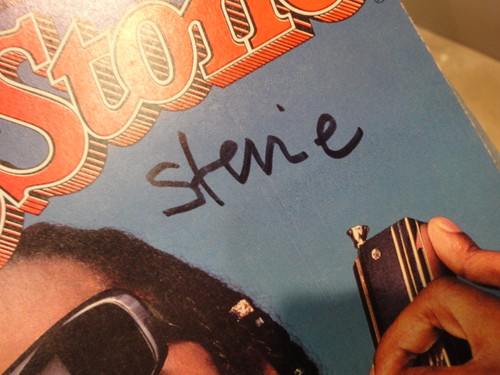