Lisa Degnan-"Elijah Wood Hollywood's Hottest Rising Star" 1999-Warner Books-8 1/2" X 11"-96 pages-Softcover Book-With Photos-Signed By Elijah Wood.Elijah Jordan Wood (born January 28, 1981) is an American actor. He made his film debut with a minor part in Back to the Future Part II (1989), then landed a succession of larger roles that made him a critically acclaimed child actor by age 9. He also had major role in "North" He is best known for his high-profile role as Frodo Baggins in Peter Jackson's critically acclaimed The Lord of the Rings trilogy. Since then, he has resisted typecasting by choosing varied roles in critically acclaimed films such as Bobby, Eternal Sunshine of the Spotless Mind, Sin City, Green Street and Everything Is Illuminated.He starred in the film Day Zero (2007) and provided the voice of the main character, Mumble, in the award-winning animated film Happy Feet. He played an American tourist turned vampire in Paris, je t'aime. In 2005, he started his own record label, Simian Records. He was cast in the lead role of an Iggy Pop biopic to be called The Passenger, but after years of development, the project now appears to be shelved.In 2006, he became a well-known voice actor in video gaming and soon became the voice of the video game icon Spyro the Dragon.The book has been autographed on the title page by Elijah Wood...............BOTH BOOK AND AUTOGRAPH ARE INVERY GOOD CONDITION. 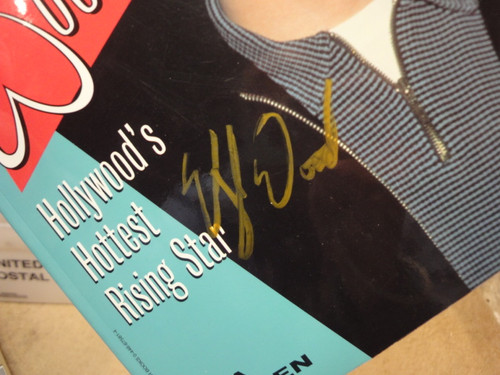