P.G. Wodehouse-"A Few Quick Ones"-1959-Herbert Jenkins-London-4" X 7"-205 pages-Hardcover Book-With Jacket-Signed By Author. Wodehouse, P. G. (Sir Pelham Grenville Wodehouse)1881–1975, English-American novelist and humorist. After a short period, first working at a bank and then writing for a London newspaper, he became a full-time fiction writer. For over 70 years Wodehouse entertained readers with his comic novels and stories set in an England that is forever Edwardian and peopled with idiotic youths, feckless debutantes, redoubtable aunts, and stuffy businessmen. He was most famous for his many novels about the rich and hapless Bertie Wooster and his unflappable valet Jeeves. The Jeeves novels include The Inimitable Jeeves (1924), Bertie Wooster Sees It Through (1955), and Much Obliged, Jeeves (1971). Early in his career, Wodehouse was also a lyricist, writing some 400 songs, more than half of them in collaboration with Jerome Kern, and contributing to the books of several musicals by other composers, including Cole Porter's Anything Goes (1934). In all, over a period of eight decades, he wrote 96 novels, 18 plays, and lyrics for 33 musicals. In 1941, while he was a prisoner of the Germans, he made five nonpolitical broadcasts for his captors, provoking considerable criticism at home. Wodehouse, who from 1910 on had lived for long periods in the United States or France, immigrated to the United States in 1947, settled on Long Island, N.Y., and became an American citizen in 1955. He was knighted shortly before his death in 1975. The book has been autographed on the title page by P.G. Wodehouse with a fountain pen in black.......................BOTH BOOK AND AUTOGRAPH ARE IN EXCELLENT CONDITION. 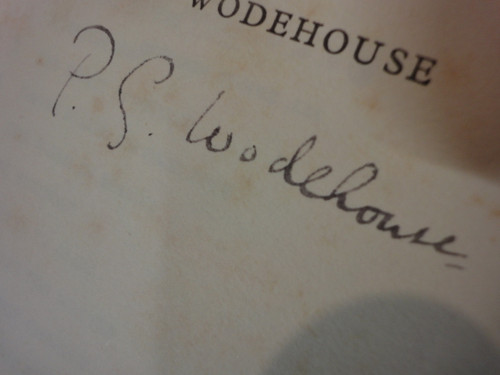