TV Guide Magazine-February 1-7,1959. This vintage TV Guide Magazine-which originally sold for fifteen cents-features a color cover photo plus article on Walter Winchell.Walter Winchell (April 7, 1897  February 20, 1972) was an American newspaper and radio commentator. He invented the gossip column while at the New York Evening Graphic.His newspaper column was syndicated in over 2,000 newspapers worldwide, and he was read by 50 million people a day from the 1920s until the early 1960s. His Sunday night radio broadcast was heard by another 20 million people from 1930 to the late 1950s.Winchell, who was Jewish, was one of the first commentators in America to attack Adolf Hitler and American pro-fascist and pro-Nazi organizations such as the German-American Bund. After WWII Winchell began to denounce Communism as the main threat facing America.During War World II, he attacked the National Maritime Union, the labor organization for the civilian United States Merchant Marine, which he said was run by Communists. In 1948 and 1949 he and the influential leftist columnist Drew Pearson "inaccurately and maliciously assaulted Secretary of Defense James Forrestal in columns and radio broadcasts." January 20, 1953: Gossip columnist Walter Winchell broadcasts from Pennsylvania Avenue, near the White House, during President Dwight D. Eisenhower's inaugural parade. In 1948 Winchell had the top rated radio show when he surpassed Fred Allen and Jack Benny.During the 1950s Winchell favored Senator Joseph McCarthy, but he became unpopular as the public turned against McCarthy's Red Scare tactics. He also had a weekly radio broadcast which was simulcast on ABC television until he ended that employment because of a dispute with ABC executives during 1955.The TV Guide Magazine has been autographed on the front by Walter Winchell............BOTH MAGAZINE AND AUTOGRAPH ARE IN VERY GOOD CONDITION........................ 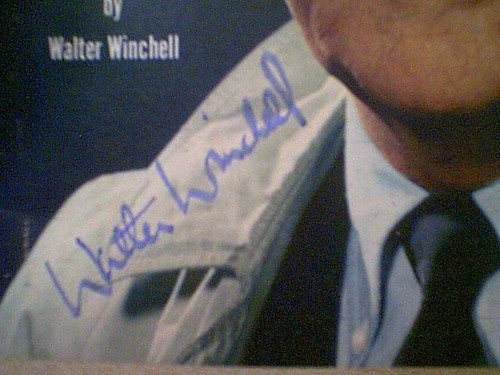