"Wake Up And Live"-1937-Robbins Music-sheet music.The hyped-up 1930s radio feud between bandleader Ben Bernie and columnist Walter Winchell is all but forgotten today, but that doesn't lessen the entertainment value of the Bernie/Winchell vehicle Wake Up and Live. Amidst the bickering of the two stars, the film traces the progress of mike-shy singer Jack Haley (whose singing voice was dubbed by Buddy Clark). Leading lady Alice Faye tricks Haley into singing on the air with Bernie's orchestra, which results in Winchell doing his best to discredit both Bernie and Haley. Eventually Haley and Alice Faye fall in love, and Ben and Walter patch up their differences. So successful was Wake Up and Live that 20th Century-Fox rushed Bernie and Winchell into a follow-up, Love and Hisses (38), but by that time their feud had taken second place in the hearts of America to the equally contrived "battle" between Jack Benny and Fred Allen. The sheet music has been autographed on the front cover by Walter Winchell with a fountain pen in blue and Alive Faye with a fountain pen in blue..........BOTH SHEET MUSIC AND AUTOGRAPHS ARE IN VERY GOOD CONDITION. 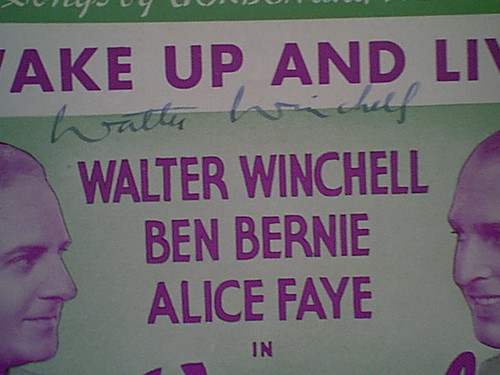