The Mexicali Brass(Crown 5546)-"Theme From The Green Hornet"-LP. This vintage LP was released in the 1960's and features the Theme from "The Green Hornet". The front cover features a photo of the Green Hornet.Please note-the cover photo of the Green Hornet is not Van Williams. Van Williams however,did sign the LP as he was the star of the show.Inspired by the success of the Batman series, ABC brought The Green Hornet to television in 1966-67, an adaptation which introduced martial arts master Bruce Lee to American audiences and starred Van Williams as the Green Hornet. Unlike Batman, the TV version of The Green Hornet was played straight, but in spite of the considerable interest in Lee, it was cancelled after only one season. However, the rise of Lee as a major cult movie star ensured continued interest in the property to the point where proposed Green Hornet productions typically have the casting of some major martial arts film star as Kato as the first order of business. Lee's popularity in Hong Kong, where he was raised, was such that the show was marketed there as The Kato Show.As with the later years of the radio version, secretary Lenore "Casey" Case is again aware of Reid's secret, and the Hornet also has a confidante within the law enforcement community, but now he is District Attorney Frank P. Scanlon. This character was changed from the original's police commissioner because the same company's Batman TV series was already using a man in that post as the official contact of its hero. William Dozier, executive producer of both programs, wanted no more comparisons between the two than were unavoidable. The music of "Flight of the Bumblebee" was so strongly identified with The Green Hornet that it was retained as the theme, orchestrated by Billy May (who also composed the new background scores) and conducted by Lionel Newman, with trumpet solo by Al Hirt. Years later, this music was featured during a key scene in the 2003 film, Kill Bill, Vol. 1, which paid tribute to Kato by featuring dozens of swordfighters wearing Kato masks during the film's key fight sequence.The LP has been autographed on the front cover by Van Williams.................CONDITION OF VINYL,COVER AND AUTOGRAPH IS VG.............. 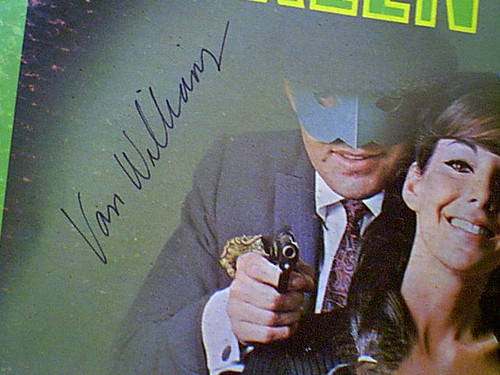