This item is an 8" X 10",black and white photo of actress Shelley Winters in a scene from one of her famous movies.This one-time roommate of Marilyn Monroe went on to carve out her own considerable niche in Hollywood. Winters won two best supporting Oscars for her portrayal of Mrs. Van Daan in the Diary of Anne Frank (1959) and for her role as Rose-Ann D'Arcey in A Patch of Blue (1965). She donated her Anne Frank Oscar to the Anne Frank House in Amsterdam, where it is proudly displayed. She was also nominated for an Oscar as best actress for A Place in the Sun (1951) and for the disaster flick, The Poseidon Adventure (1972). She was a regular on Roseanne (199196) and appeared in films ranging from the campy (The Purple People Eater, 1988) to the serious (The Portrait of a Lady, 1996). Her career included 130 small and big screen movie appearances over 55 years. Her autobiography, Shelley, was published in 1980. The photo has been autographed on the front by Shelley Winters.........BOTH PHOTO AND AUTOGRAPH ARE IN VERY GOOD CONDITION................. 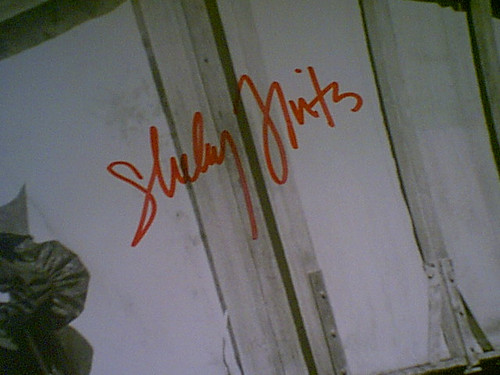