"Theme From The Survivors"-1983-Golden Torch-sheet music.Comedian and actor Robin Williams was a manic prankster and lovable loose cannon on TV and in film from his 1970s breakthrough until his untimely death in 2014. Robin Williams first became a star on the TV series Mork and Mindy (1978-82), playing Mork from Ork, a sweetly nutty space alien learning about life on Earth. Williams moved quickly into films, often playing wise comic oddballs in heartfelt dramas. He was Oscar-nominated for Good Morning, Vietnam (1987), Dead Poets Society (1989) and The Fisher King (1991) before finally winning an Academy Award as the sympathetic psychologist who befriends Matt Damon in Good Will Hunting (1997). In a more comic vein he played a wacky genie in the Disney animated feature Aladdin, the strong-armed title sailor in 1980's Popeye (with Shelley Duvall as Olive Oyl), a cross-dressing dad in Mrs. Doubtfire (1993, with Sally Field), a grown-up Peter Pan in the 1991 Steven Spielberg movie Hook, and President Teddy Roosevelt in the comedy adventure Night at the Museum (2006). His other films include Insomnia (2002, with Al Pacino), One Hour Photo (2002), Robots (2005, voice) and David Duchovny's House of D (2004). He also starred on the TV series The Crazy Ones in 2013-14, and in 2011 he starred on Broadway in Bengal Tiger at the Baghdad Zoo. He was found dead at his home in Tiburon, California on 11 August 2014.The sheet music has been autographed on the front cover by Robin Williams...............BOTH SHEET MUSIC AND AUTOGRAPH ARE IN VERY GOOD CONDITION. 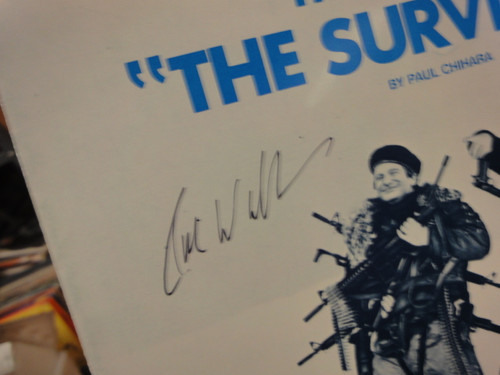