Maurice Wilkins-:The Third Man Of The Double Helix-The Autobiography Of Maurice Wilkins"-2001-Oxford University Press-5 1/2" X 9"-274 pages-Hardcover Book-With Jacket-With Photos-Signed By Author.................Maurice Hugh Frederick Wilkins CBE FRS (15 December 1916  5 October 2004) was a New Zealand-born British biophysicist and Nobel laureate whose research spanned multiple areas of physics and biophysics, contributing to the scientific understanding of phosphorescence, isotope separation, optical microscopy and X-ray diffraction, and to the development of radar. He is best known for his work at King's College London on the structure of DNA. Wilkins' work on DNA falls into two distinct phases. The first was in 19481950, when his initial studies produced the first clear X-ray images of DNA (the images were actually taken by Rosalind Franklin), which he presented at a conference in Naples in 1951 attended by James Watson. During the second phase, 195152, Wilkins produced clear "B form" "X" shaped images from squid sperm, images he sent to James Watson and Francis Crick, causing Watson to write "Wilkins... has obtained extremely excellent X-ray diffraction photographs" [of DNA]. The book has been signed on the title page by Maurice Wilkins. Please note the book was signed near the end of Maurice Wilkin's life so there are tremors in the signature............................BOTH BOOK AND AUTOGRAPH ARE IN EXCELLENT CONDITION. 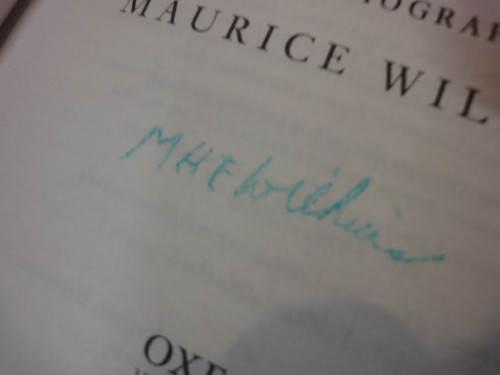