Mac Wiseman(Dot 3084)-"Tis Sweet To Be Remembered"-LP. Some tracks include-Tis Sweet To Be Remembered,Shackles and Chains,Four Walls Around Me plus more!Malcolm B. Wiseman (born May 23, 1925), better known as Mac Wiseman, is a bluegrass singer, nicknamed The Voice with a Heart. The bearded singer is one of the cult figures of bluegrass. Born in Crimora, Virginia, he studied at the Shenandoah Conservatory of Music in Dayton, Virginia and started his career as a disc jockey at WSVA-AM in Harrisonburg, Virginia.His musical career began as upright bass player in the band of country singer Molly O'Day. When Lester Flatt and Earl Scruggs left Bill Monroe's band, Wiseman became the guitarist for their new band, the Foggy Mountain Boys. Later he played with Bill Monroe's Bluegrass Boys. After a performance on Louisiana Hayride he became popular as solo artist. In the 1950s, he was the star of The Old Dominion Barn Dance on WRVA in Richmond, Va.During the folk revival in the 1960s, Wiseman had successful concerts at the Hollywood Bowl and Carnegie Hall.The LP has been autographed on the front cover by Mac Wiseman............CONDITION OF VINYL,COVER AND AUTOGRAPH IS VG. 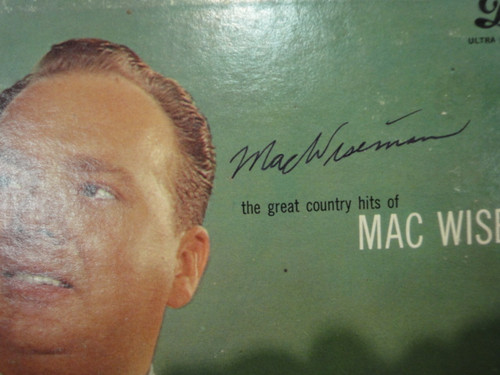