THIS IS AN AUTHENTICALLY AUTOGRAPHED 78 BY MARC WILSON... THE MAGIC LAND OF ALLA KA ZAM(PETER PAN 583)TV SHOW THEME SONG AND PRESTO MAGIC-PIC COVER IS SIGNED BY MARC WILSON-CONDITION OF THE VINYL,COVER, AND AUTOGRAPH IS VERY GOOD. When television began to grow, Wilson launched a show titled Time for Magic on a local station in Dallas in 1955. Calling on his marketing training he made this show possible by attracting sponsorship from the Dr. Pepper Bottling Company.[3] He then expanded to other shows in Houston and San Antonio. When videotape was developed, Wilson created the first show to be videotaped and nationally syndicated. That was the original black and white Magic Land of Allakazam.[3] It debuted on 1 October 1960 on CBS-TV and aired every Saturday morning on that network for two years. His wife, Nani Darnell, assisted him and they were joined by Bev Bergeron, who helped write the shows and played the character Rebo the Clown.[5][6] The show was sponsored by Kelloggs. Wilson, Darnell and Bergeron toured state fairs during the summer and made appearances on other network shows. The writing team grew at CBS to include Bobby "Torchy" Towner, Bobby Fenton, Leo Behnke, Lin Searles with Johnny Daniel and Carl Owen building the illusions for the first year of 39 shows. For the second year the existing creative team remained, but Frances Martineau was added along with a young John Gaughan. This group was the nucleus that brought a new look to magic illusions that are still being used today.Magic Land of Allakazam moved from CBS-TV to ABC-TV in 1962 without missing one week on air. That same year, Wilson appeared on the short-lived ABC western comedy and variety series The Roy Rogers and Dale Evans Show. In 1965, Magic Land of Allakazam left ABC and was internationally syndicated. During its peak it was one of the top shows in the Nielson ratings for Saturday morning.[citation needed] Wilson later created The Funny Face Magic Show and the Pillsbury sponsored Magic Circus in 1971. He also provided the Hall of Magic at the 1964/5 Worlds Fair in New York. He and his crew assisted in the technical production of the magic in many network shows, including The Magician, Circus of the Stars, Hollywood Palace, The Six Million Dollar Man, The Incredible Hulk, Columbo and more. Wilson's last regular television stint was "The Magic Of Mark Wilson". The series was seen in national syndication in 1981 and Wilson was aided on this final series by second son Greg[7] as well as by longtime assistant Nani. In 1971, he published his Mark Wilson's Complete Course In Magic, which is still in production in various forms around the world. 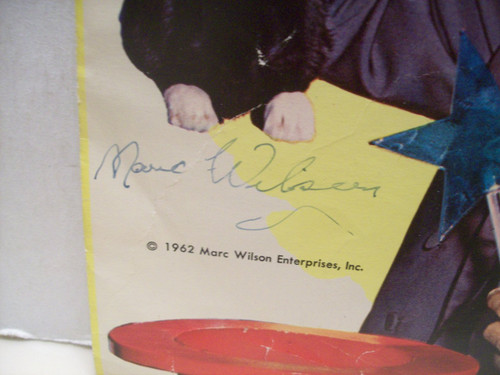