Randall Hank Williams (born May 26, 1949), known professionally as Hank Williams Jr. or Bocephus, is an American singer-songwriter and musician. He is the son of country music legend Hank Williams. By the mid-1970s Williams began to pursue a musical direction that would eventually make him a superstar. While recording a series of moderately successful songs, Williams began a heavy pattern of both drug and alcohol abuse. Upon moving to Alabama, in an attempt to refocus both his creative energy and his troubled personal life, Williams began playing music with Southern rock musicians including Waylon Jennings, Toy Caldwell, and Charlie Daniels. Hank Williams Jr. and Friends (1975), often considered his watershed album, was the product of these then-groundbreaking collaborations. A small piece of shrink wrap has been removed from the front cover and the LP has been autographed there by Hank William Jr...........CONDITION OF LP IS STILL SEALED. CONDITION OF AUTOGRAPH IS EXCELLENT. 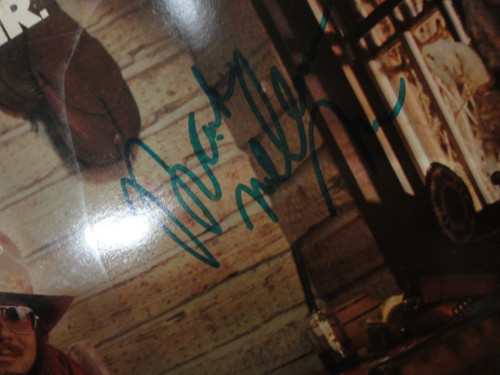