THIS IS AN AUTHENTICALLY AUTOGRAPHED LP BY JUSTIN WILSON.. JUSTIN WILSON FOR TRUE(STEREO PAULA LPS 2232)PHOTO COVER IS SIGNED BY JUSTIN WILSON. RELEASED IN 1976. CONDITION OF THE VINYL,COVER, AND AUTOGRAPH IS VERY GOOD. Justin E. Wilson (April 24, 1914 - September 5, 2001) was a southern American chef and humorist known for his brand of Cajun cuisine-inspired cooking and humor. He was a self-styled "raconteur" and a staunch political conservative. Wilson was born in Roseland in Tangipahoa Parish, one of the "Florida Parishes" east of Baton Rouge. He began his career as a safety engineer while he traveled throughout Acadiana. His safety lectures that he made to refinery workers prompted him on the road to becoming a Cajun storyteller. He remembered it this way on the back cover of The Justin Wilson Cook Book: "Way back when I first started as a safety engineer, I took myself pretty seriously, and I found I was putting my audiences to sleep. So having lived all my life among the Cajuns of Louisiana, and having a good memory for the patois and the type of humor Cajuns go for, I started interspersing my talks on safety with Cajun humor." Wilson (who was actually only one-half Cajun, or "half-bleed Ca-jon" as he put it) later recorded several humor albums, beginning with "The Humorous World of Justin Wilson." He later appeared as a guest on the popular CBS series The Ed Sullivan Show. He was known for the catchphrase, "I gar-on-tee!". He later wrote seven Cajun cookbooks and two books of Cajun stories, and hosted several cooking shows on PBS that combined Cajun cooking and Cajun humor. Wilson was also politically active in his early years. His father, Democrat Harry D. Wilson, was the Louisiana agriculture commissioner in the first half of the twentieth century. In 1951-1952, Justin Wilson was the manager of the unsuccessful Democratic gubernatorial campaign of Lieutenant Governor William J. "Bill" Dodd. He and Dodd were close though they often disagreed on political philosophy. Wilson's brother-in-law, Bolivar Kemp, was the Democratic attorney general of Louisiana from 1948-1952. Over the years, Wilson, a conservative and known for his emphasis of patriotic themes, became involved in numerous Louisiana political campaigns. Former state Senator Donald Wayne "Don" Williamson of Caddo Parish recalls Wilson having cut a commercial for his own Democratic challenge to incumbent Insurance Commissioner Sherman A. Bernard in 1979. Williamson said that Wilson just volunteered to help him. Williamson only narrowly lost to Bernard, who later went to prison for fraud in the handling of his job duties. In time, Wilson's ties to the Democrats soured, and he supported numerous Republican candidates. It is not known if Wilson himself became a Republican. It has been rumored incorrectly that Wilson was born not in Louisiana, but in Mississippi or some other southern state, and that he was not a Cajun. But Wilson identified himself as a Cajun through maternal lines, and as mentioned was indeed born in Louisiana, albeit not in the traditional Cajun section of the state. Wilson's last residence was in Summit in Pike County, Mississippi. 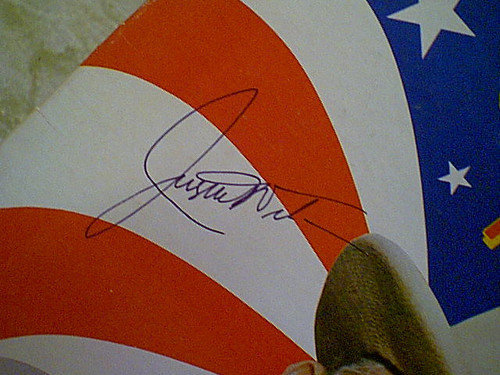