This item is a 3 1/2" X 5 1/2", color fan club postcard from the 1960's. The postcard features a color photo of actor Will Hutchins as he starred in the popular "Sugarfoot" television series. Sandy-haired, 6'1" leading man Will Hutchins established his reputation with "aw, shucks," country bumpkin roles -- even though he was born in a suburb of Los Angeles, won a Shakespearean festival Best Actor award while still in high school, and specialized in Greek drama at Pomona College. After military service, he took cinema classes at U.C.L.A., learning virtually every technical aspect of filmmaking. Discovered by TV producer Albert McCreery, he was signed to a Warner Bros. contract in 1956. The following year he was cast as the title character in the TV Western Sugarfoot, playing laconic, easygoing frontier lawyer Tom "Sugarfoot" Brewster (so named because he was "one grade lower than a tenderfoot") from 1957 through 1960. He continued appearing in guest roles on TV until his next series stint as Dagwood Bumstead in the short-lived 1968 revival of Blondie. Eventually Will Hutchins left films to write poetry and pursue a second career as a circus clown. The postcard features a "standard" message from Will. The postcard has been autographed on the message side by Will Hutchins in purple-the autograph reads-"Hi! Christine-Will"..............BOTH POSTCARD AND AUTOGRAPH ARE IN EXCELLENT CONDITION................ 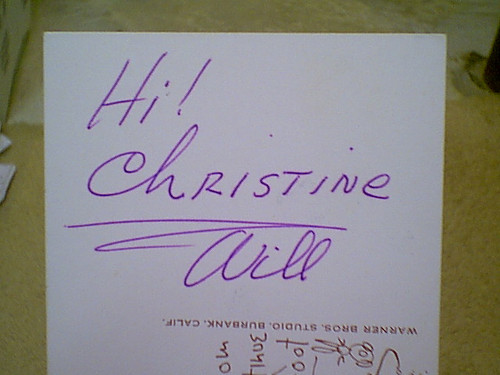