THIS IS AN AUTHENTICALLY AUTOGRAPHED PHOTO BY HAL WILLIAMS.. THIS IS A 7 INCH BY 9 INCH BLACK AND WHITE PHOTO SIGNED BY HAL WILLIAMS. CONDITION OF THE PHOTO AND AUTOGRAPH IS VERY GOOD. Hal Williams (born December 14, 1938) is an American actor, best known for his recurring role as the black cop Officer Smith ("Smitty") on Sanford and Son, and as the patriarch Lester Jenkins on 227. Williams started out in show business in 1969. Since then, he has appeared in movies such as Hardcore, Private Benjamin, and The Rookie. In the early to mid-1990s, he starred in many of comic Sinbad's productions, including The Sinbad Show and The Cherokee Kid. Most recently, he played the grandfather in the Bernie Mac film Guess Who. His other television credits include Moonlight, Moesha, Suddenly Susan, Minor Adjustments, L.A. Law, Night Court, Magnum, P.I., Hill Street Blues, Gimme a Break, The Jeffersons, The Dukes of Hazzard, T.J. Hooker, The Waltons, Knots Landing, The White Shadow, What's Happening!!, Good Times, Quincy, M.E., Kung Fu, S.W.A.T.,Gunsmoke and That Girl. Williams is also the host of the annual Sickle Cell Anemia Foundation nationally-televised telethon. 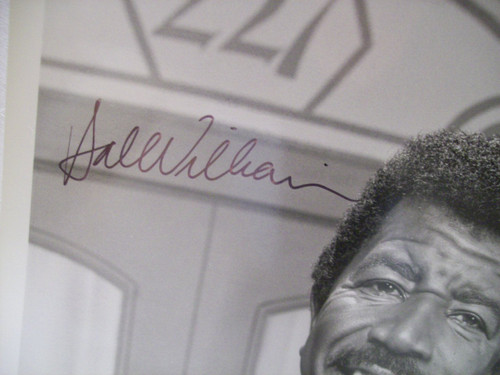