This item is THE COVER ONLY of a Country Song Roundup Magazine-No. 4 which features a photo musician Hank Williams............ PLEASE NOTE THERE IS NO COMPLETE MAGAZINE-THIS IS THE COVER ONLY...........Williams, Hank, 1923–53, American country singer and songwriter, b. near Georgiana, Ala., as Hiram Williams. He is widely regarded as the leading figure in the history of country music (see country and western music ). During his teenage years Williams began singing in Southern roadhouses, theaters, and radio stations. He signed his first recording contract in 1946 and the following year produced his first hit, Move It On Over. In 1949 his greatest hit, Lovesick Blues, was released and he made a spectacular debut on the Grand Ole Opry . His melancholy voice and powerful, simply written songs earned him 27 Top 10 hits in the period 1949–53. His recordings continue to attract fans decades after his death............. PLEASE NOTE THERE IS NO COMPLETE MAGAZINE-THIS IS THE COVER ONLY....The magazine has been autographed on the front by Hank Williams with a fountain pen in black....................BOTH MAGAZINE COVER AND AUTOGRAPH ARE IN VERY GOOD CONDITION. 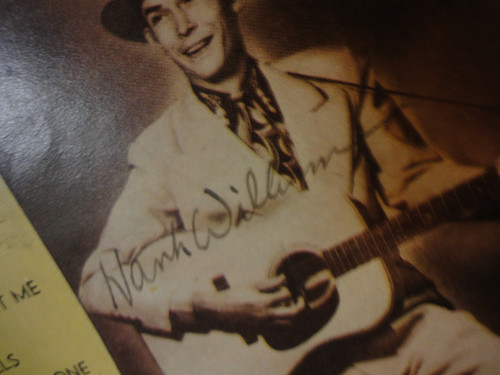