This item is a 9" X 12",black and white lithograph photo of William Burroughs and Patti Smith.The controversial Beat Generation writer-William Burroughs-will be best remembered for his hip, yet slightly insane novel, Naked Lunch. In a book review, the New York Times said the book was less a novel than a series of essays, puns, epigrams  all hovering about the explicit subject matter of making out on drugs while not making out in either work or love. With Allen Ginsberg and Jack Kerouac, Burroughs embodied the Beat Generation with experimentation with sex, drugs and the written word. In 1951, Burroughs and his wife, Joan Vollmer, while drinking with friends, decided to play William Tell. Vollmer put a glass of water on her head, and Burroughs attempted to shoot it off. He failed, putting a bullet in her forehead. She died instantly. The shooting was declared an accident, and Burroughs served a short jail sentence. In the 1980s, Burroughs emerged as a hero to musicians, artists and filmakers. His other works include Junkie and Exterminator!The lithograph photo has been autographed on the front by William Burroughs and Patti Smith................BOTH PHOTO AND AUTOGRAPHS ARE IN VERY GOOD CONDITION. 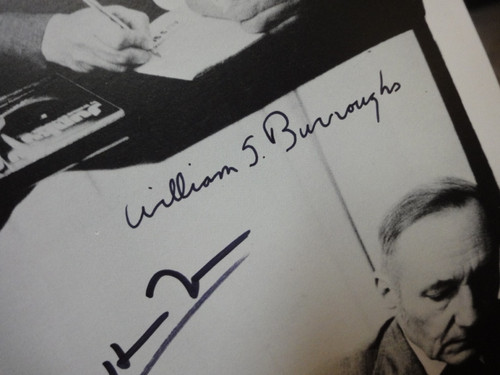