THIS IS AN AUTHENTICALLY AUTOGRAPHED PHOTO BY JOHNNY WHITAKER... THIS IS A 8 INCH BY 10 INCH COLOR PHOTO SIGNED BY JOHNNY WHITAKER. CONDITION OF THE PHOTO AND AUTOGRAPH IS VERY GOOD. Johnny Whitaker (born December 13, 1959) is an American actor notable for several performances for film and television during his childhood. The naturally redheaded Whitaker is best known for his role as Brian Keith's 6-year-old nephew, Jody Davis, on Family Affair from 1966-1971, originated the role of Scotty Baldwin on General Hospital in 1965, played the lead in Hallmark's 1969 The Littlest Angel,[1] and portrayed the title character in the 1973 musical version of Tom Sawyer. Two of his siblings, Billy and Dora, provided the voices of the rabbits Skippy and Tagalong for Disney's animated film Robin Hood in that same year. 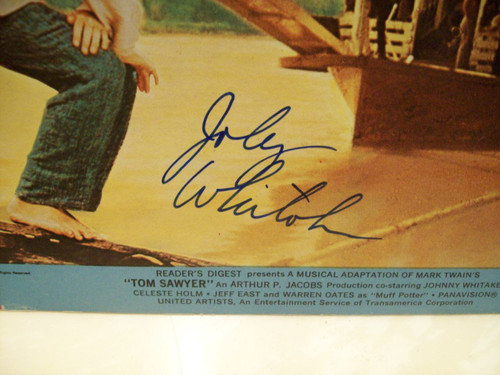