"Alabama Space & Rocket Center Earth's Largest Space Exhibit" "The Space Place Lets You Be The Astronaut"-1971-7" X 10"-Softcover Souvenir Book-With Color Photos-With Foreword by Wernher Von Braun-Signed By Wernher Von Braun. von Braun, Wernher 191277, German-American rocket scientist and astronautics engineer, b. Germany, grad. Berlin Technological Institute (B.S., 1932), Univ. of Berlin (Ph.D., 1934). Devoted to the pursuit of rocketry and spaceflight since his teenage years, von Braun assisted Hermann Oberth after 1930 in early experiments in building and firing small liquid fuel rockets. His doctoral studies were funded by the German army, which confiscated and classified his 1934 dissertation. A member of the Nazi party and the SS, von Braun was (193745) technical director of the German rocket research center at Peenemünde and was a research professor there from 1943. He was responsible for the successful development of the German V-2 rocket, thousands of which were launched against London and Antwerp during World War II's final year, and he also developed other rocket weapons. At the close of World War II, von Braun, who had buried his records and fled toward the American lines, was brought (1945) to the United States, and soon became a prime figure in the cold war arms race and later in the space program.From 1945 to 1950 von Braun was technical adviser at the White Sands Proving Grounds and also project director at Fort Bliss, Tex. He went to Huntsville, Ala., in 1950, first as chief of the guided missile development division, Redstone Arsenal (195056), and then as director of the development operations division of the Army Ballistic Missile Agency (now the George C. Marshall Space Flight Center). There he developed rockets for the National Aeronautics and Space Administration's lunar program, most notably the Saturn rockets used for the Apollo missions. In 1970 he became NASA's deputy associate administrator. Von Braun continued to be an ardent advocate of rocket development and space flight, acting as America's best-known spokesman for space exploration. He became a U.S. citizen in 1955. His writings include Across the Space Frontier (1952), The Exploration of Mars (with Willy Ley, 1956), and First Men to the Moon (1960).The souvenir book has been autographed on the inside of the cover by Wernher Von Braun with a fountain pen in black..............BOTH BOOK AND AUTOGRAPH ARE IN VERY GOOD CONDITION. 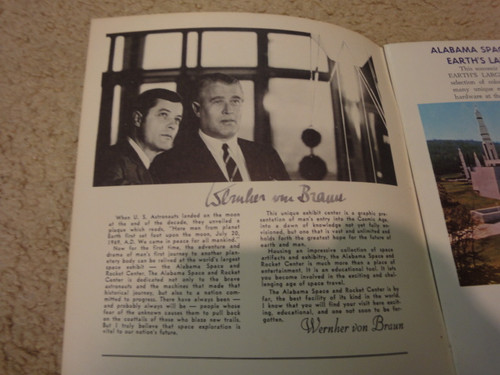