Original Soundtrack-"Is Paris Burning"(Columbia OS 3030 Stereo)-LP. This soundtrack LP features the 1966 Paramount Movie-"Is Paris Burning". The movie stars Orson Welles,Kirk Douglas,Robert Stack,Alain Delon,Leslie Caron,Anthony Perkins,Glenn Ford and George Chakiris and they are featured on the front cover in original scenes. In 1944, with Paris on the verge of Liberation by the allies, Adolph Hitler ordered that the City of Light be blown up and burned to the ground. General Dietrich Von Choltitz, after much rumination, decided that he didn't want to go down in history as the man who destroyed Paris. His refusal to follow Hitler's orders would make him a pariah in Germany for the rest of his life; nor was his gesture ever rewarded by the Allies. From this very human story in the midst of one of the most inhuman conflicts in history grew the screenplay (by Gore Vidal and Francis Ford Coppola) of the all-star, internationally produced Is Paris Burning? Whereas the earlier The Longest Day was able to support a castful of celebrities and brief subplot vignettes, Is Paris Burning? seems more weighted down than weighty. Still, a modern audience will have fun playing "spot the star" throughout the film, especially when those spotted stars include the likes of Gert Frobe (as Choltitz), Jean-Paul Belmondo, Alain Delon, Kirk Douglas (as Patton), Glenn Ford (as Bradley), Yves Montand, Simone Signoret, Robert Stack, and even Anthony Perkins as a wide-eyed GI. Filmed on a gargantuan scale, Is Paris Burning? was based on a book by Larry Collins and Dominique LaPierre. The film was lensed in black and white, save for the Technicolor finale (in the original road-show prints).The LP has been autographed on the front cover by Orson Welles in black,Robert Stack in blue,Kirk Douglas in blue and Alain Delon in green........CONDITION OF VINYL,COVER AND AUTOGRAPHS IS VG PLUS.............. 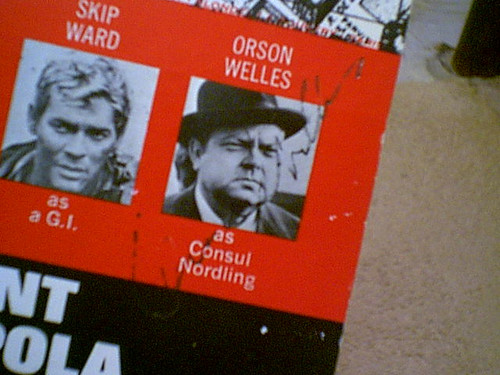