This item is an 8" X 10",early black and white photo of Mae West.Before Marilyn and before Madonna, there was Mae West, Hollywood's first superstar sex symbol and the original blonde bombshell. A performer since childhood, she wrote her own comedic material and built up an act made up of open sexuality and clever double entendres. Her 1926 Broadway play Sex led to her arrest on obscenity charges (and plenty of free publicity); her play Diamond Lil (1928) made her a star and put the finishing touches on a character she was to play her entire life. In the 1930s she took Hollywood by storm, stealing the show in Night After Night (1932) and then starring in classic comedies such as She Done Him Wrong (1933, with Cary Grant) and I'm No Angel (1933). In 1935 she was proclaimed the highest paid woman in the United States, a movie star famous for her ability to poke fun at her own public image. Her films in the 1940s were less successful and West returned to the stage, performing in plays and, later, a nightclub act. In 1970 she returned to the screen in the film version of Gore Vidal's Myra Breckinridge, and in 1978 she appeared in her last movie, Sextette, still playing a sexy dame in spite of her advanced years. The photo has been autographed on the front by Mae West with a fountain pen in green..........BOTH PHOTO AND AUTOGRAPH ARE IN VERY GOOD CONDITION....................... 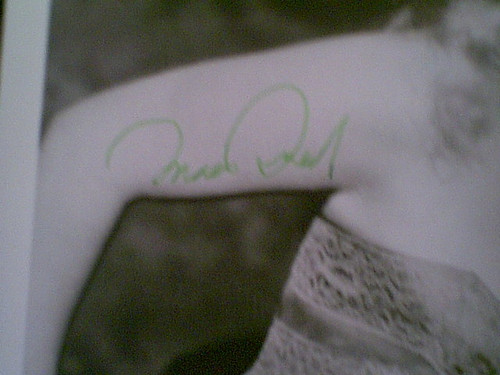