This item is a 10 1/2" X 12",black and white lithograph photo of actor Johnny Weissmuller.Johnny Weissmuller (born Peter Johann Weissmüller June 2, 1904  January 20, 1984) was an American competition swimmer and actor best known for playing Tarzan in films of the 1930s and 1940s and for having one of the best competitive swimming records of the 20th century. Weissmuller was one of the world's fastest swimmers in the 1920s, winning five Olympic gold medals for swimming and one bronze medal for water polo. He won fifty-two US National Championships, set sixty-seven world records and was purportedly undefeated in official competition for the entirety of his competitive career. After his swimming career, he became the sixth actor to portray Edgar Rice Burroughs's ape man, Tarzan, a role he played in twelve motion pictures. Dozens of other actors have also played Tarzan, but Weissmuller is by far the best known. His character's distinctive Tarzan yell is still often used in films.The lithograph photo has been autographed on the front by Johnny Weissmuller with a fountain pen in brown...................BOTH PHOTO AND AUTOGRAPH ARE IN VERY GOOD CONDITION. 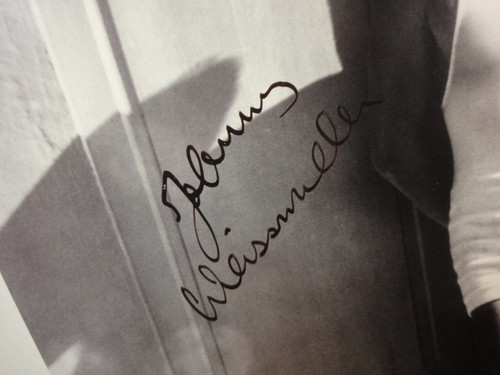