Dr. Chaim Weizmann-"American Address"-1923-Palestine Foundation Fund-5" X 7"-64 pages-Hardcover Book-Illustrated- Signed By Author.Weizmann, Chaim, 18741952, scientist and Zionist leader, first president (194852) of Israel, b. Russia, grad. Univ. of Freiburg, 1899. He lectured in chemistry at the Univ. of Geneva (19013) and later taught at the Univ. of Manchester. Active in Zionism from his youth, Weizmann first visited Palestine in 1907. He became a British subject in 1910, and in World War I he was (191619) director of the British admiralty laboratories. He became famous when he developed a synthetic acetone to be used in the manufacture of explosives. In 1917 he helped procure the pro-Zionist declaration of Arthur James Balfour. A founder of so-called synthetic Zionism, Weizmann supported grass-roots colonization efforts as well as higher-level diplomatic activity. After 1920 he assumed leadership in the world Zionist movement, serving twice (192031, 193546) as president of the World Zionist Organization. In World War II he was (193945) honorary adviser to the British ministry of supply and did research on synthetic rubber and high-octane gasoline. When the republic of Israel was founded (1948), Weizmann became the first president. At Rehoboth, where he lived, Weizmann founded a research institute (now the Weizmann Institute of Science). He wrote many papers for scientific journals. Ezer Wiezman is his nephew.The book has been autographed on the title page by Chaim Weizmann with a fountain pen in blue.........BOTH BOOK AND AUTOGRAPH ARE IN VERY GOOD CONDITION.............................................. 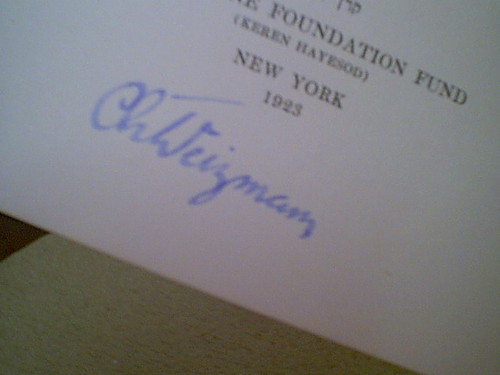