Alan Watts-"The Spirit Of Zen-The Way Of Life, Work And Art In The Far East"-
1960-Grove Press-5" X 8"-136 pages-Softcover Book-With Illustrations-Signed
By Author.....Alan Wilson Watts (6 January 1915 – 16 November 1973) was a British writer and speaker known for interpreting and popularizing Buddhism, Taoism, and Hinduism for a Western audience. Born in Chislehurst, England, he moved to the United States in 1938 and began Zen training in New York. He received a master's degree in theology from Seabury-Western Theological Seminary and became an Episcopal priest in 1945. He left the ministry in 1950 and moved to California, where he joined the faculty of the American Academy of Asian Studies. Watts gained a following while working as a volunteer programmer at the KPFA radio station in Berkeley. He wrote more than 25 books and articles on religion and philosophy, introducing the emerging hippie counterculture to The Way of Zen (1957), one of the first bestselling books on Buddhism. In Psychotherapy East and West (1961), he argued that Buddhism could be thought of as a form of psychotherapy. He considered Nature, Man and Woman (1958) to be, "from a literary point of view—the best book I have ever written". He also explored human consciousness and psychedelics in works such as "The New Alchemy" (1958) and The Joyous Cosmology (1962). The book has been autographed on the title page by Alan
Watts. Please note the book was signed hear the end of Alan Watts' life so there are tremors in the signature...................BOTH BOOK AND AUTOGRAPH ARE IN VERY GOOD CONDITION. 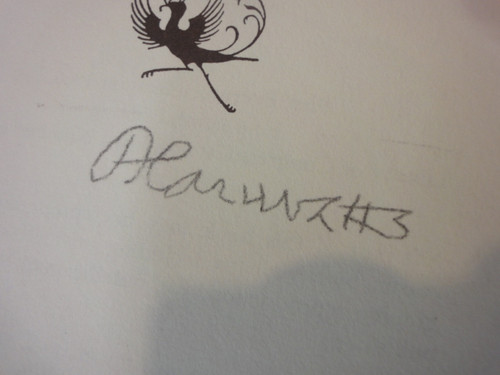