Tex Watson as told to Chaplain Ray-"Will You Die For Me?"-1978-Fleming Revell Co-6" X 9"-222 pages-Hardcover Book-With Jacket-With Photos-Signed By Tex Watson. Charles Denton "Tex" Watson Jr. (born December 2, 1945) is an American murderer who was a central member of the "Manson Family" led by Charles Manson. On August 9, 1969, Watson, Patricia Krenwinkel, and Susan Atkins murdered pregnant actress Sharon Tate, Jay Sebring, and three other people at 10050 Cielo Drive in Benedict Canyon, Los Angeles. The next night, Watson traveled to Los Feliz, Los Angeles, and participated in the murders of Leno and Rosemary LaBianca. Watson was found guilty of murder and imprisoned in 1971. On August 9, 1969, as a member of the Manson Family, Watson led Susan Atkins, Linda Kasabian, and Patricia Krenwinkel to 10050 Cielo Drive, the home of Roman Polanski and Sharon Tate. Present in the house were Tate, Jay Sebring, Wojciech Frykowski, and Abigail Folger.They murdered all four and Steven Parent in the drive-way. Watson and his crime partners inflicted 28 stab wounds to Folger alone. Tate, Sebring, and Frykowski all suffered numerous stab wounds. Sebring and Frykowski were also shot.The following night, Watson and six others went to the home of Leno and Rosemary LaBianca. Manson and Watson entered the home. According to Watson's book Will You Die For Me?, Manson held the occupants at gunpoint while Watson tied them up. Manson then returned to the car and sent Krenwinkel and Van Houten into the house. Watson, Krenwinkel, and Van Houten then murdered the couple. The book has been autographed on the title page by Tex Watson. His first signature is very faint and hard to read so Tex Watson signed the book a second time......................BOTH BOOK AND AUTOGRAPH ARE IN EXCELLENT CONDITION. 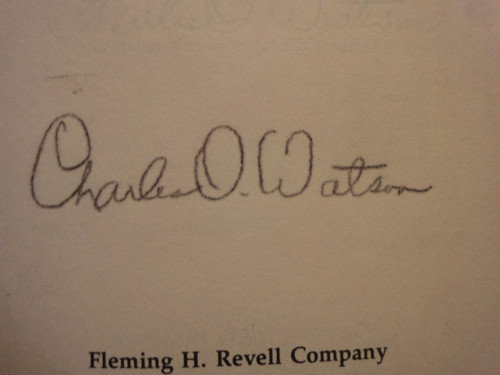