THIS IS AN AUTHENTICALLY AUTOGRAPHED PHOTO BY SAM WATERSON AND STOCKARD CHANNING... THIS IS A 7 INCH BY 9 INCH BLACK AND WHITE PHOTO SIGNED BY SAM WATERSON AND STOCKARD CHANNING FROM THE 1987 FILM THE ROOM UPSTAIRS. HAS AN ATTACHED ORIGINAL DATED BYLINE ON CBS TV STATIONARY. CONDITION OF THE PHOTO AND AUTOGRAPH IS EXCELLENT. Samuel Atkinson "Sam" Waterston (born November 15, 1940) is an American actor noted particularly for his portrayal of Jack McCoy on the long-running NBC television series Law & Order. He has also appeared in many feature films. Stockard Channing (born February 13, 1944) is an American Academy Award- and Golden Globe Award-nominated, three time Emmy Award-winning and Tony Award-winning stage, film and television actress. She is known for her portrayal of First Lady Abbey Bartlet in the NBC television series The West Wing; for playing Betty Rizzo in the film Grease; and for her role in both the stage and screen versions of Six Degrees of Separation. 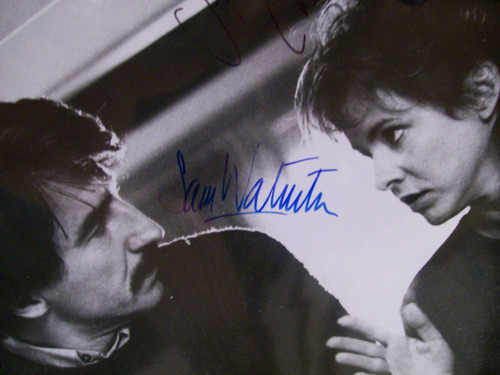