This item is an 8" X 10",black and white publicity photo of Robert Wagner in the 1956 Movie-"Between Heaven And Hell".Between Heaven and Hell is a 1956 20th Century Fox Cinemascope color war film based on the novel The Day the Century Ended by Francis Gwaltney that the film follows closely. The story is told in flashback format detailing the life of Sam Gifford (Robert Wagner) from his life as a Southern landowner to his war service in the Philippines during World War II.The film stars Robert Wagner, Buddy Ebsen, Terry Moore, and Broderick Crawford, was directed by Richard Fleischer and was partly filmed on Kaua'i.The photo has been autographed on the front by Robert Wagner..........BOTH PHOTO AND AUTOGRAPH ARE IN VERY GOOD CONDITION. 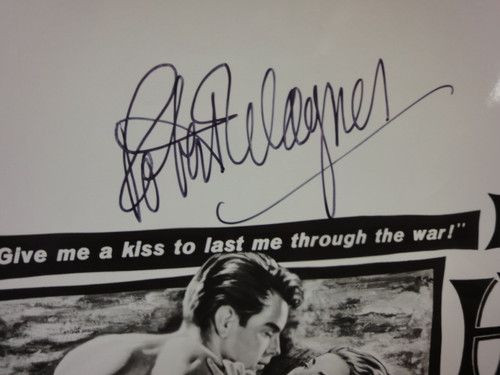