Playbill for The Lyceum Theatre-1954-"Reclining Figure"-6" X 9"-24 pages-theatre program. This vintage Playbill features the 1954 production of "Reclining Figure" starring MIke Wallace.Myron Leon "Mike" Wallace (born May 9, 1918) is an American journalist, former game show and media personality.Wallace has been a correspondent for CBS' 60 Minutes since its debut in 1968. During his 50+ year career, he has interviewed a wide range of prominent newsmakers. Wallace retired as a regular full-time correspondent in 2006 but still appears frequently on the 60 Minutes series.Mike Wallace originally appeared in the play- Reclining Figure, a 1954 comedy about painters and their patrons and the tricks of the dealers and collectors who prey on them. The Playbill has been autographed on the front by Mike Wallace with a fountain pen in green...........BOTH PLAYBILL AND AUTOGRAPH ARE IN VERY GOOD CONDITION.................. 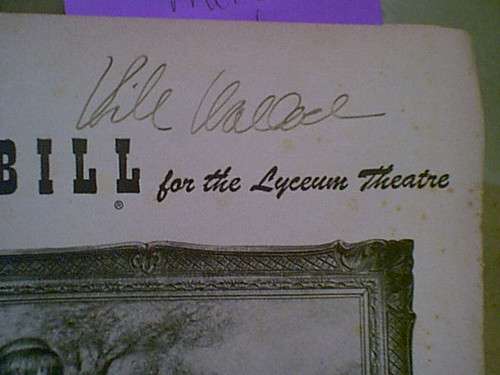