This item is a 9 1/2" X 14",black and white photo of Lech Walesa. The photo has been mounted on a 9 1/2" X 14" piece of photography paper.Wa??sa, Lech 1943, Polish labor and political leader. He worked as an electrician at the Lenin Shipyard in Gda?sk but was dismissed in 1976 for his antigovernment protests. In 1980 striking workers at the shipyard won his reinstatement, and he assumed leadership of the independent trade union Solidarity. A moderate, he gained numerous concessions from the authorities before his arrest and internment in the military crackdown of 1981. He was released in Nov., 1982, and in 1983 was awarded the Nobel Peace Prize.In 1987, he helped block Jaruzelski's reform initiatives by organizing a boycott of the government referendum, and in 1988 he led a series of nationwide strikes. In 1989 he negotiated an agreement with the government under which Solidarity was legalized and allowed to campaign as a political party in the upcoming elections. By the end of Aug., 1989, a Solidarity-led coalition government was in power, but Wa??sa became increasingly critical of Premier Tadeusz Mazowiecki. In Dec., 1990, Wa??sa was elected president of Poland, defeating Mazowiecki, and resigned his Solidarity post. Wa??sa failed to win reelection in 1995, losing to Aleksander Kwa?niewski, a former Communist who was the Democratic Left Alliance candidate. He ran again in 2000 but received only 1% of the vote.The photo has been autographed on the front by Lech Walesa.........................BOTH PHOTO AND AUTOGRAPH ARE IN VERY GOOD CONDITION..................... 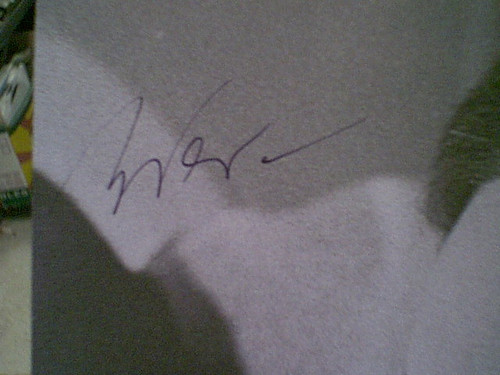