Original Soundtrack-"The Savage Seven"(Atco SD 33-245)-LP.This violent motorcycle gang drama finds the outlaws riding onto an Indian reservation to take over. A rival gang has other ideas. There are few likeable characters in this feature, the possible exception being Johnnie (Robert Walker), and he is a convicted thief. Rock-guitar legend Duane Eddy plays off the seven, while Penny Marshall makes an early big screen appearance. Marshall would gain fame for her television work in the 1970s, and by the 1990s she would become one of Hollywood's leading directors. The Savage Seven is a modern-day cowboys and Indians tale, only instead of horses, the outlaws ride motorcycles.The LP has been autographed on the front cover by Robert Walker..........CONDITION OF VINYL,COVER AND AUTOGRAPH IS VG. 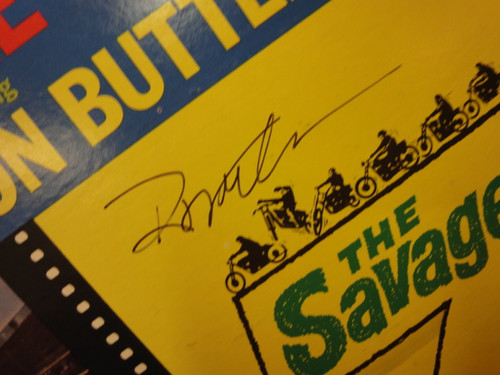