THIS IS AN AUTHENTICALLY AUTOGRAPHED SHEET MUSIC BY JIMMY WAKELY.. JIMMY WAKELY AND MARGARET WHITING-BROKEN DOWN MERRY GO ROUND-RELEASED IN 1950-PHOTO COVER IS SIGNED BY JIMMY WAKELY IN BROWN FOUNTAIN PEN-CONDITION OF THE SHEET MUSIC AND AUTOGRAPH IS VERY GOOD. James Clarence Wakely February 16, 1914, died September 23, 1982) was an American Country-Western singer and actor, one of the last crooning cowpokes following the Second World War. During the 1930s, 1940s and 1950s, he made several Country-Western recordings, appeared in several B-Western movies with most of the major studios, appeared on radio and television, and even had his own series of comic books. For his work for recording, Wakely has a star on the Hollywood Walk of Fame at 1680 Vine Street. 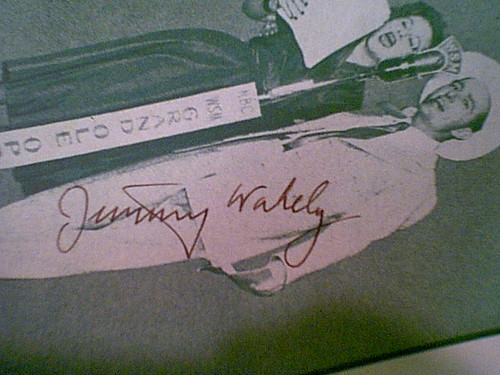