Life Magazine-August 2,1968-64 pages. This vintage LIfe Magazine-whichoriginally sold for thirty five cets-features a cover of George Wallace,Richard Nixon and Ronald Reagan-"Nixon and Reagan try to slow him down but polls show Wallace in the saddle at home and raiding North. The magazine also features a 6 page article with photos on George Wallace-"The Wallace Clout".George Corley Wallace Sr. (August 25, 1919  September 13, 1998), was a United States politician who was elected Governor of Alabama as a Democrat four times (1962, 1970, 1974 and 1982) and ran for U.S. President four times, running as a Democrat in 1964, 1972, and 1976, and as the American Independent Party candidate in 1968. He is best known for his pro-segregation attitudes and as a symbol of bigotry during the American desegregation period, which he modified after the passage of the 1964 Civil Rights Act by arguing that it was better that he be governor while the schools were being desegregated than for someone else to be in authority. The Life Magazine has been autographed on the front cover by George Wallace with a fountain pen in black..................BOTH MAGAZINE AND AUTOGRAPH ARE IN VERY GOOD CONDITION..................... 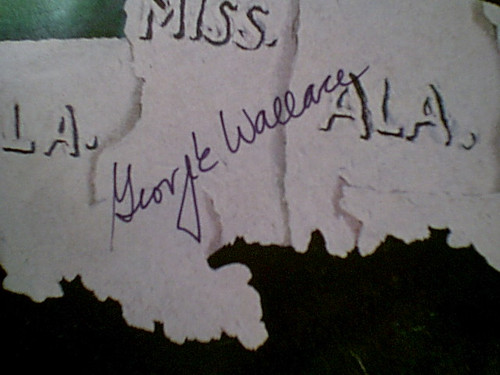