THIS IS AN AUTHENTICALLY AUTOGRAPHED LITHOGRAPH BY DENZEL WASHINGTON.. THIS IS A 7 1/2 INCH BY 10 1/2 INCH COLOR LITHOGRAPH PHOTO SIGNED BY DENZEL WASHINGTON. PHOTO IS MOUNTED ON PHOTOGRAPHY CARDBOARD. CONDITION OF THE PHOTO AND AUTOGRAPH IS VERY GOOD. Denzel Hayes Washington, Jr. (born December 28, 1954) is an American actor and director. He has garnered much critical acclaim for his work in film since the 1990s, including his portrayals of real-life figures, such as Steve Biko, Malcolm X, Rubin "Hurricane" Carter, Melvin B. Tolson, Frank Lucas, and Herman Boone. Washington has been awarded three Golden Globe awards and two Academy Awards for his work. He is notable as the second black man (after Sidney Poitier) to win the Academy Award for Best Actor, which he received for his role in the 2001 film Training Day. 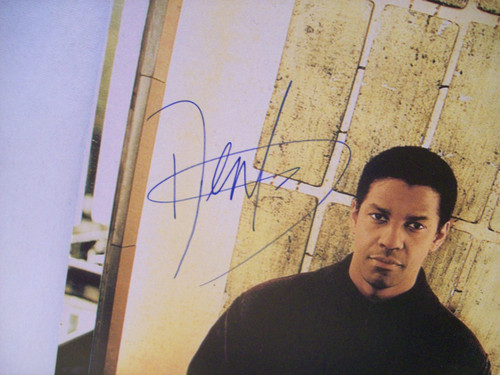