This item is an 8" X 10",black and white photo of actor Christopher Walken.Christopher Walken starred as Nick, the on-the-edge Russian roulette player in The Deer Hunter (1978), a role that earned him an Oscar as best supporting actor and established him as a specialist in playing unstable characters. By the 1990s Walken's creepy charm had become a popular in-joke, with him being cast in films for laughs almost as often as for serious effect. His films include The Anderson Tapes (1972, with Sean Connery), At Close Range (1986, as Sean Penn's father), the James Bond movie A View To a Kill (1985, with Roger Moore) and Quentin Tarantino's Pulp Fiction (1994). After the 1990s Walken seemed to be everywhere. He was in the Fatboy Slim video for "Weapon of Choice," he was on Saturday NIght Live and he appeared in several films, including the horror series Prophecy (1995-2000), the animated feature Antz (1998), Tim Burton's Sleepy Hollow (1999, starring Johnny Depp), Steven Spielberg's Catch Me If You Can (2001, starring Leonardo DiCaprio) and the second film version of Hairspray (2007, starring John Travolta as Walken's wife).The photo has been autographed on the font by Christopher Walken..........BOTH PHOTO AND AUTOGRAPH ARE IN VERY GOOD CONDITION. 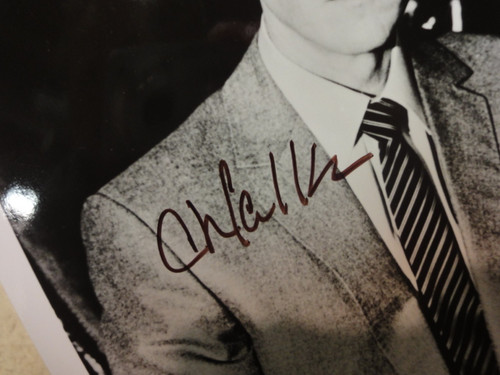