THIS IS AN AUTHENTICALLY AUTOGRAPHED LP BY BETTY WALKER.. LOVE AND LAUGHTER-BETTY WALKER-(STEREO CORAL CRL 757328)FRONT PHOTO COVER IS SIGNED BY BETTY WALKER. TRACKS:INSTANT CEIL, YOUR TAX IS SHOWING, EH PLURRONE, WAIT TILL I FINISH, WHO HARRY WHAT?, FORCE FLUIDS, OH GYPSY, FORGET IT LINDA, GOOD SHOW, HAPPY BIRTHDAY, DRIVIN ME CRAZY, PLEASANT DREAMS. CONDITION OF THE VINYL,COVER, AND AUTOGRAPH IS VG. Betty Walker (August 7, 1928July 26, 1982) was a Jewish-American comic who performed primarily during the 1950s and 1960s. She was born Edith Seeman in Elizabeth, New Jersey to Latvian immigrants. Over the course of her career, Betty appeared numerous times on television, almost always doing her telephone act, wherein she delivered a monologue to her unseen friend "Ceil" at the other end of the line. She made guest appearances on the Tonight Show Starring Johnny Carson, The Merv Griffin Show, The Mike Douglas Show and The Steve Allen Show, on the radio, and in film, most notably in Exodus in 1960. 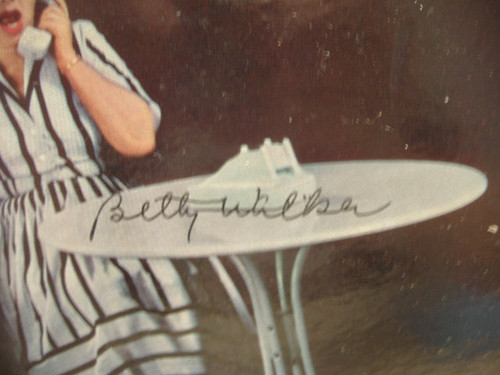