Andy Warhol-"America"-1985-Harper & Row-8" X 11"-223 pages-Softcover Book-With Photographs-Signed By Author.....Andy Warhol (born Andrew Warhola; August 6, 1928  February 22, 1987) was an American artist, director and producer who was a leading figure in the visual art movement known as pop art. His works explore the relationship between artistic expression, celebrity culture, and advertising that flourished by the 1960s, and span a variety of media, including painting, silkscreening, photography, film, and sculpture. Some of his best known works include the silkscreen paintings Campbell's Soup Cans (1962) and Marilyn Diptych (1962), the experimental film Chelsea Girls (1966), and the multimedia events known as the Exploding Plastic Inevitable (196667).........Andy Warhol carried a camera with him everywhere he went and, taken from ten years of extraordinary shots, his America aspires to the strange beauty and staggering contradictions of the country itself. Exploring his greatest obsessions - including image and celebrity - he photographs wrestlers and politicians, the beautiful wealthy and the disenfranchised poor, Capote with the fresh scars of a facelift and Madonna hiding beneath a brunette bob. He writes about the country he loves, wishing he had died when he was shot, commercialism, fame and beauty. The softcover book has been autographed on the front cover by Andy Warhol............BOTH BOOK AND AUTOGRAPH ARE IN VERY GOOD CONDITION. 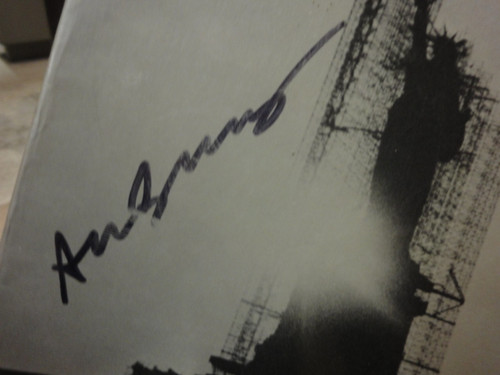