This item is an 8" X 10",black and white photo of actor Max Von Sydow in a scene from the 1988 Movie-"Pelle The Conqueror".Long but rewarding, the Danish-Swedish Pelle the Conqueror is based on the early passages of Martin Andersen Nexoe's four-volume novel. Pelle (Pelle Hvengaard) is the son of a 19th-century Swedish farmer (Max Von Sydow). Seeking escape from their poverty-stricken surroundings, father and son emigrate to Denmark. Upon arrival, however, they are treated like indentured servants, leading to a profound ideological turnaround for the impressionable Pelle. In the original novel, Pelle ended up embracing Communism. Nexo's political overtones are soft-pedalled in the film, which concentrates on the close, indestructable relationship between Pelle and his father. Adapted for the screen by Bille August, Pelle the Conqueror won the 1988 Oscar for Best Foreign Language Film. The photo has been autographed on the front by Max Von Sydow..........BOTH PHOTO AND AUTOGRAPH ARE IN VERY GOOD CONDITION................ 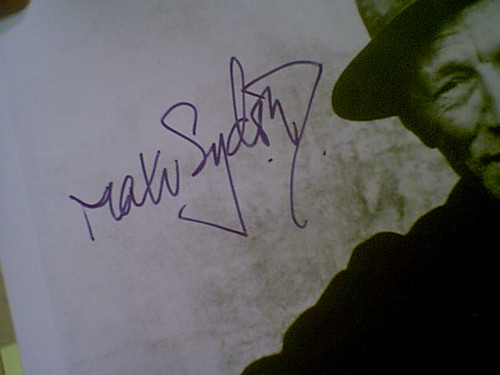