This item is a 6 1/2" X 8" color photo signed by Wernher Von Braun. Wernher von Braun was a German rocket scientist who helped build the massive rockets that sent American astronauts to the moon in the years after World War II. Born and raised in Germany, von Braun studied physics in Berlin and began building rockets in the 1930s. When the German army took over all rocket programs, von Braun went to work for the government, eventually joining the Nazi party and becoming an officer in the S.S. During the war he developed the V-2 rocket, the German ballistic missile used on British civilians toward the end of the war. At the close of the war, von Braun surrendered to the Americans, who put him to work on their own ballistic missile program. During the 1950s his prominence in the rocket program and his skill at self-promotion made him an American celebrity, but whispered tales of his Nazi past never quite dissipated. He was instrumental in the development of the U.S. space program, and, with William Pickering and James Van Allen, led the group that in 1958 developed the first American satellite, Explorer I. Von Braun was chosen in 1960 to direct NASA's Marshall Space Flight Center, where he worked on the Saturn V rocket, the launch system that carried Neil Armstrong and others to the moon. Von Braun left NASA in 1972 and went to work in the private sector, but cancer forced him to retire in January of 1977; he died six months later. The photo has been autographed on the back by Wernher Von Braun with a fountain pen in brown...............BOTH PHOTO AND AUTOGRAPH ARE IN VERY GOOD CONDITION. 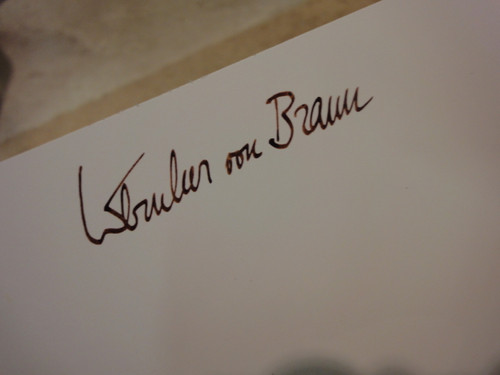