THIS IS AN AUTHENTICALLY AUTOGRAPHED PHOTO BY JAN-MICHAEL VINCENT... THIS IS A 7 INCH BY 9 INCH BLACK AND WHITE PHOTO SIGNED BY JAN-MICHAEL VINCENT FROM AIRWOLF . HAS ORIGINAL DATED TYPED BYLINE ON CBS STATIONARY. CONDITION OF THE PHOTO AND AUTOGRAPH IS VERY GOOD. Jan-Michael Vincent (born July 15, 1944) is an American actor most well-known for his role as helicopter pilot Stringfellow Hawke on the 1980s U.S. television series Airwolf (19841986), which continues to enjoy a large cult fanbase. Vincent had an extensive television and film career that began in the late 1960s and lasted until the early 2000s. 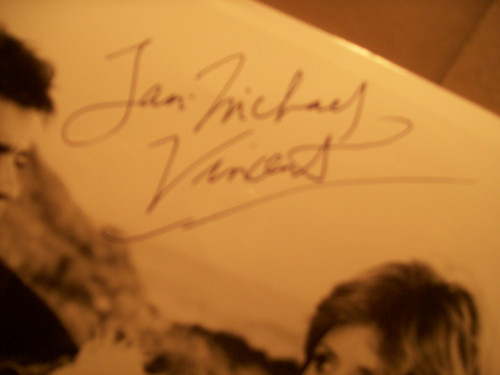