Valley Forge Music Fair-1978-Bobby Vinton-6" X 9"-32 pages-concert program.Every era needs its crooner, and in the early '60s, it was Bobby Vinton. Vinton's sentimental balladeering and orchestral, middle-of-the-road arrangements were a throwback to a decade earlier, before rock & roll had found its mass market. If Vinton is sometimes identified with a rock & roll audience, it's only because his music was bought by young listeners for a time, and because he still catches some airplay on oldies stations. What he sang was vocal pop, landing some of the biggest hits of the early '60s with "Roses Are Red (My Love)," "Blue on Blue," "There! I've Said It Again," "Mr. Lonely," and "Blue Velvet," the last of which has become his signature song in the wake of its notorious prominence in David Lynch's Blue Velvet. The concert program has been autographed on the front cover by Bobby Vinton.............BOTH CONCERT PROGRAM AND AUTOGRAPH ARE IN VERY GOOD CONDITION. 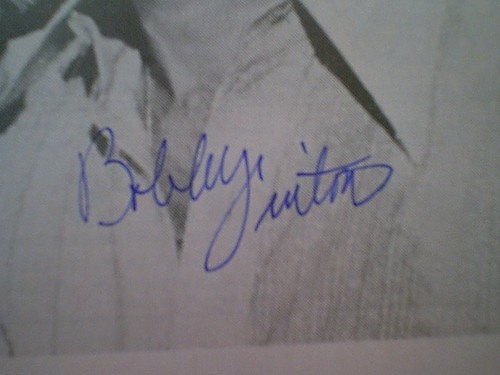