Joe Venuti and George Barnes(Concord Jazz 30)-"Live At The Concord Summer Festival"-LP. Some tracks include-Sweet Georgia Brown,What Are You Doing For The Rest Of Your Life,C jam Blues plus more!Giuseppe Venuti (September 16, 1903 – August 14, 1978), better known as Joe Venuti, was an Italian-American jazz musician and pioneer jazz violinist.He worked with Benny Goodman, Adrian Rollini, the Dorsey Brothers, Bing Crosby, Bix Beiderbecke, Jack Teagarden, Frank Signorelli, the Boswell Sisters and most of the other important white jazz and semi-jazz figures of the late 1920s and early 1930s. However, following Lang's early death in 1933, his career began to wane, though he continued performing through the 1930s, recording a series of excellent commercial dance records (usually containing a Venuti violin solo) for the dime store labels, OKeh and Columbia, as well as the occasional jazz small group sessions. He was also a strong early influence on western swing players like Cecil Brower, not to mention the fact that Lang and Venuti were the primary influences of Django Reinhardt and Stephane Grappelli. (Many of the 1920s OKeh sides continue to sell through 1935, when ARC reissued selected sides on the 35 cent Vocalion label.)The LP has been autographed on the front cover by Joe Venuti............CONDITION OF VINYL,COVER AND AUTOGRAPH IS MINT MINUS. 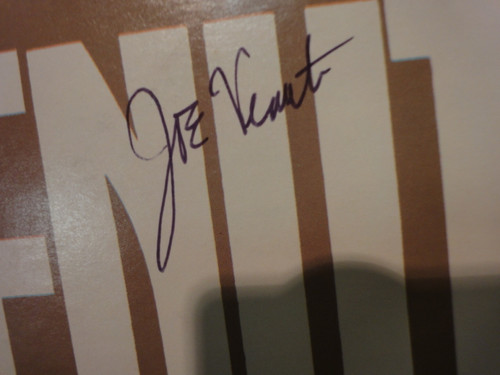