This item is a 9" X 12",color lithograph photo of musician Steve Vai.Steven Siro "Steve" Vai (born June 6, 1960) is a three time Grammy Award-winning Italian-American rock guitarist, songwriter, vocalist and producer. After starting his professional career as a music transcriptionist for Frank Zappa, Vai recorded and toured in Zappa's band for two years, from 1980 to 1982. The guitarist began a solo career in 1983 and has released 13 solo albums as of 2008. Apart from his work with Frank Zappa, Vai has also recorded and toured with Public Image Ltd., Alcatrazz, David Lee Roth, and Whitesnake. Vai has been a regular touring member of the G3 Concert Tour which began in 1996. In 1999 Vai started his own record label, Favored Nations, intending to showcase, as Vai describes, "...artists that have attained the highest performance level on their chosen instruments.The color lithograph photo has been autographed on the front by Steve Vai..............BOTH PHOTO AND AUTOGRAPH ARE IN VERY GOOD CONDITION........................ 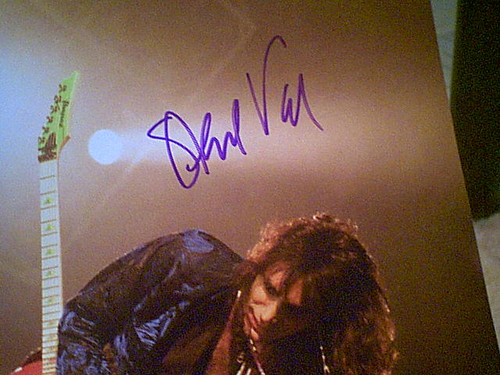