Playbill for the Ambassador Theatre-1971-"Ain't Supposed To Die A Natural Death"-6" X 9"-32 pages-theatre program. This vintage Playbill features Melvin Van Peebles' musical "Ain't Supposed To Die A Natural Death".Ain't Supposed to Die a Natural Death (Tunes from Blackness) is a musical with a book, music, and lyrics by Melvin Van Peebles. The musical contains some material also on three of Van Peebles' albums, Br'er Soul, Ain't Supposed to Die a Natural Death and As Serious as a Heart-Attack, some of which were yet to come out.The musical is a series of 19 politically outspoken, darkly comic, and sexually charged musical monologues that explore the negative aspects of African-American street life and the ghetto experience. Each character has a painful story to tell in funk, soul, jazz and blues-inflected songs. The innovative piece, presented in a confrontational, "in your face" style, is a precursor to choreopoem, spoken word, and rap music. It "contributed to the growing black presence on Broadway."In 1970, Van Peebles decided to transform some of the albums he had recorded between 1968 and 1970 into a musical. According to Van Peebles, "The songs were mirroring the incidents that were happening in the streets."[1] Van Peebles marketed the musical to black audiences in churches "all up and down the fu**ing East Coast. Ministers have congregations, and the congregations would come with busloads of people.The Playbill has been autographed on the front cover by Melvin Van Peebles............BOTH PLAYBILL AND AUTOGRAPH ARE IN VERY GOOD CONDITION............. 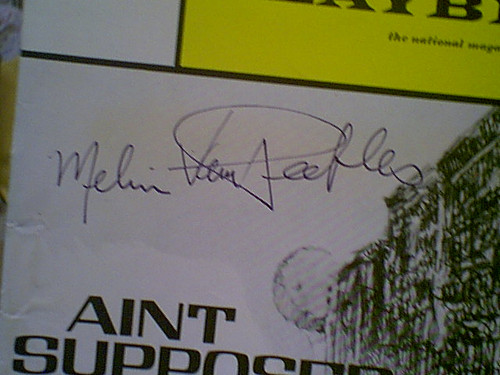